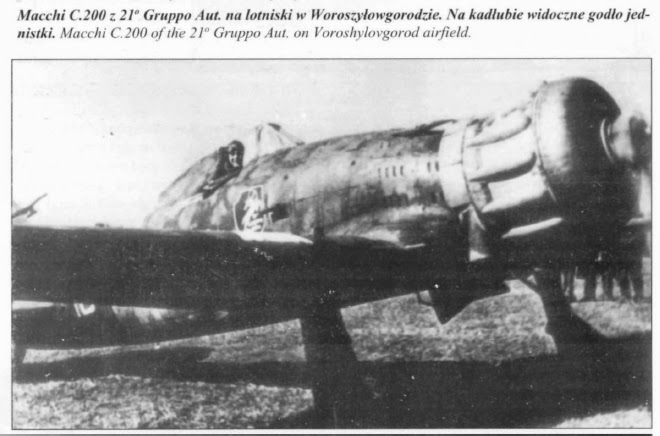 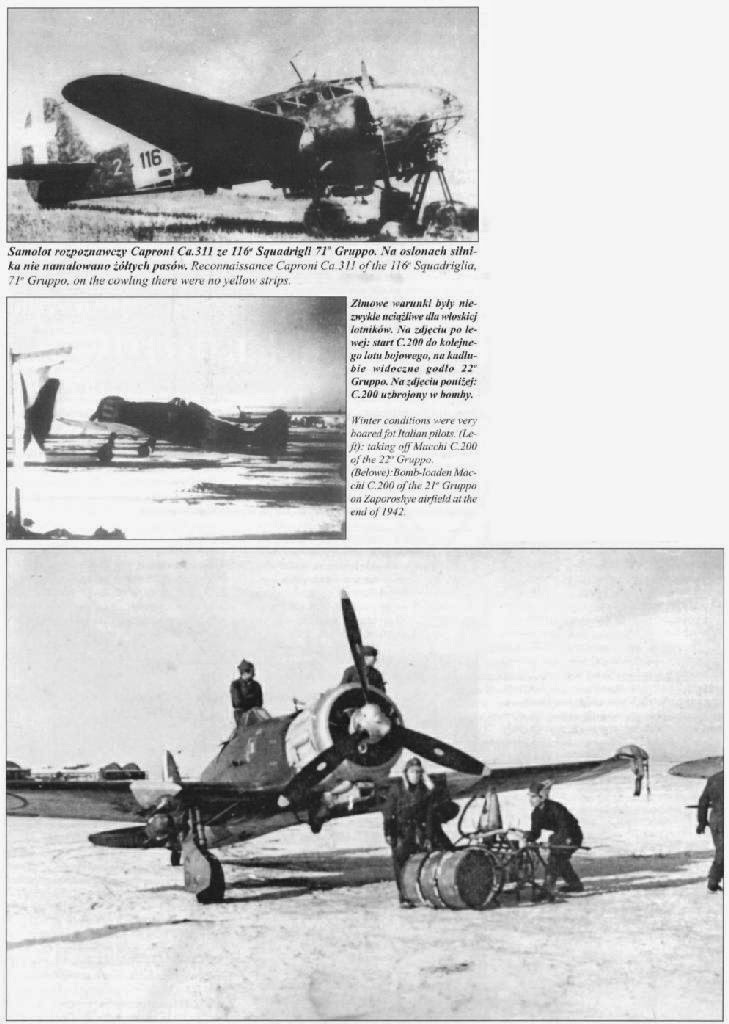 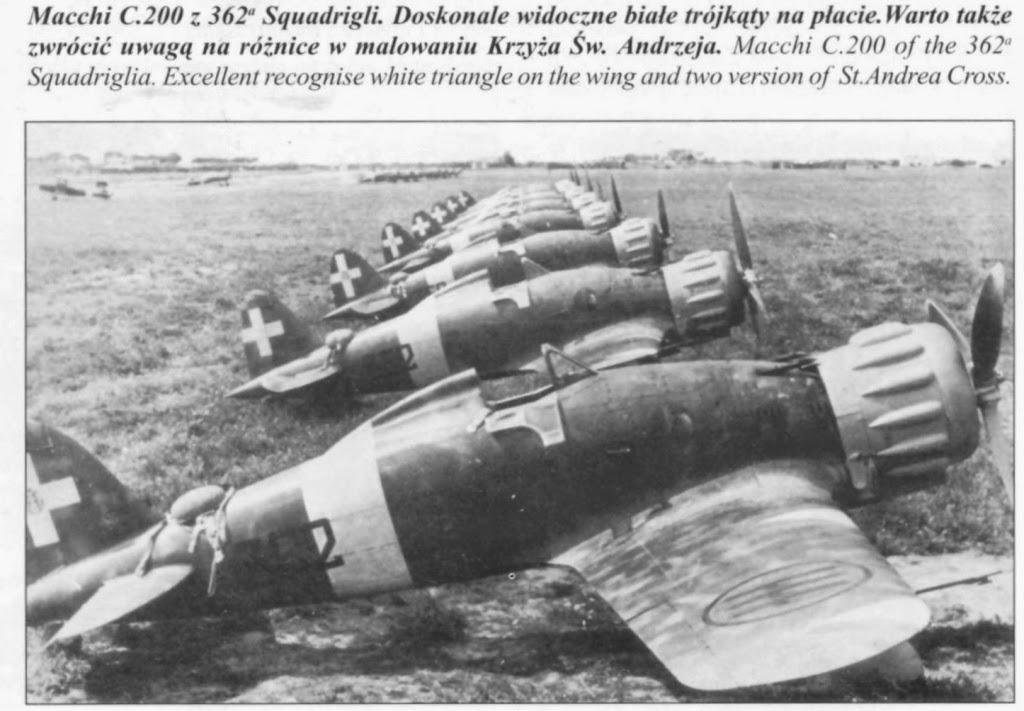 The Comando Aviazione for this expeditionary force was formed on 25 July 1941.They were to support the Italian 8th Army in its advance to the River Don and operations in southern Russia. Where necessary, they also assisted the Germans, receiving commendations from General Messe and the local German commanders for covering the assault over the Don. After the retreat from Stalingrad began, the air contingent withdrew to Italy in January 1943. In 17 months the two fighter Gruppi had flown over 6,000 sorties, claiming 88 kills for the loss of 19.

22 GRUPPO CT
Flying through Romania to what was to be a relatively successful campaign, despite the bitter weather and harsh conditions. For this, the Russian front, they received an additional squadriglia, 371 from 157 Gruppo. The numbers of unit aircraft sent were 51 MC 200s, 2 SM 81s, and 3 Ca 133s. The latter joined at Krivoi Rog on the 26th then they moved to Stalino. Two were lost by March 1942, and were not replaced as they were found to be inferior to the companion SM 81s and newly arrived SM 73s.

In the first combat, on 27 August, the Gruppo claimed six SB-2 bombers and two 1-16 fighters. Intercepts and escorts for reconnaissance aircraft were the early duties. Bad weather restricted the number of sorties and by October they were ordered to give direct support to the ground forces as well.

Between 5 March and 3 May the Gruppo joined the German Nahkampfführer Stalino to escort German aircraft, mainly Ju 87s, over the Don front. Fighter sweeps and ground strafing were also undertaken. The unit earned a German commendation for their assistance in this area. However, the crews were by now showing signs of strain from their constant battles with the elements and the enemy, so they were recalled to Italy on 7 May. Their aircraft were passed to the incoming 21 Gruppo.

21 GRUPPO CT
Between March and July 1942 the unit personnel moved to Stalino, replacing 22 Gruppo as the fighter component of the Russian Expeditionary Force. They received that unit's surviving aircraft in addition to the ten new MC 200s they had brought with them. In early June 361 Sq arrived from the Aegean.

On 27 June two squadriglie were detached to Borvenkovo to cover the crossing of the River Don at Izyum, carrying out fighter sweeps and ground strafing. Using Voroscilovgrad as their main base, squadriglie were detached where needed most. Two went to Tazinskaj a as escorts to German Ju 87Ds from 24 July, and two then went to Oblivskaja four days later. In August two were on intercept duties at Millerovo and one was at Kantamirovka until 18 December when it moved to Starobelsk.

It was on 12December that Tenente Walter Benedetti led seven MC200s of 361 Sq from Kantamirovka to attack Russian troops attempting to surround units of the Italian 8th Army, who were defending the approaches to Stalingrad. It seems that the officer was downed by antiaircraft fire, but it is known that the Yak 9s of the 586th Regiment, under Commander T. Kazarinova, were making their first appearances in the area and so may have caused the loss of this highly experienced and decorated pilot. The weather was icy cold and a freezing mist covered the low altitude. The superb view from the open cockpit Macchi may have been countered by the icy blast and poor weather, and allowed one or more Yaks to attack unnoticed while the Italians concentrated on strafing the troops below.

Reunited back at Voroscilovgrad by the end of December, the last operation was carried out on 17 January 1943 over the Millerovo area. Five days later they retired to Stalino, ready for the return journey home. Fifteen unserviceable aircraft were left behind.

During September they had received 12MC202s, and later two photo-reconnaissance versions had arrived. Bad weather hindered operations and the MC 202s only managed 17 sorties with no losses or claims. The MC 200s claimed 88 Russian aircraft for the loss of the 15 writeoffs. A creditable performance for an open-cockpit fighter in the Russian autumn and winter. In February, at Odessa, the unit had 24 MC 200s and 9 MC 202s left.

61 GRUPPO OA
In July 119 Sq arrived and the following month the Gruppo took 32 Ca 311s and an SM 82 to Russia. On 26 August 34 Sq moved to Krivoi Rog. The others followed five days later. In October 128 Sq used Saporoshje. On 16 November 119 Sq went to Stalino, closely followed by the others. They began bombing duties from here, in addition to the reconnaissance duties for the army. In the spring of 1942 the unit left its surviving Capronis to the incoming 71 Gruppo at Stalino. During their tour in Russia, between August 1941 and April 1942, they made 337 sorties in 686 hours and lost only four aircraft.

71 GRUPPO OA
In the spring of 1942 the unit,Autonomo since 13 May, came under 8 Armata and joined in supporting the advance into Russia. They took over 61 Gruppo's Ca 311s at Stalino. During August and September they received seven BR 20Ms,followed by five more in December. Most of these went to 38 Sq, performing valuable photoreconnaissance work in the Don area in August. At this time 116 Sq was detached to Kalinovskaja landing ground, with a section of Ca 311s at Kantamirovka. Two Fi 156C liaison aircraft were used from November.

Following the retreat across Russia the unit returned to Italy, leaving all its surviving Capronis behind.
Posted by Mitch Williamson at 12:05 PM

Email ThisBlogThis!Share to TwitterShare to FacebookShare to Pinterest
Labels: History